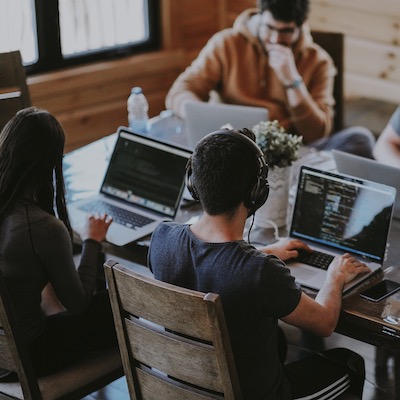 We’re excited to include guest posts on our blog from interesting people and companies in the industry. This post on top programming languages was written by Seen by Indeed – a talent-matching platform for job-seekers in tech.

When you’re in tech, you need the right skills on your resume to impress recruiters. In fact, they are often only looking for 7.4 seconds! But what tech skills are employers actually looking for? And which ones are must-haves vs. nice-to-haves? The short answer: It varies a lot depending on the job you’re looking for within software engineering.

We looked at more than 500 tech skills in US tech job postings on Indeed.com to find out which are the top programming languages for the following tech roles: software engineer, front-end developer, back-end developer, and full stack developer.

Here’s a break down of the most requested tech skills and programming languages based on data from real job postings:

Software engineers work most often with Java, C++, Python, JavaScript or C# (or a combination of a few of these programming languages), according to job postings on Indeed. The most useful language to learn or know depends on the specific software engineer job you’re applying for and the industry you’re working in.

C++ and Python are popular languages for software engineers, but Java takes the top spot. It appears in over half (53%) of these job postings. Why? The language is highly versatile and has applications in nearly every industry. Netflix, for instance, has a Java-driven architecture. This has helped the company scale to more than two billion content requests per day. And it’s not just big names that favor Java. Thousands of midsize companies and up-and-coming startups use Java on a daily basis, too.

The fourth most popular skill for software engineers is JavaScript, a front-end language showing up in 28.7% of job postings. Trailing closely behind? Microsoft’s C# (28.4%) which is used to build games (particularly for Xbox) and desktop, mobile, and web apps.

Front-end developers are in charge of transforming design mockups and wireframes into websites, apps, and web elements that a user sees and interacts with (e.g., page layout, nav menu, fonts, colors, sliders). So, that’s where CSS (61.5%) and HTML (48.1%) come in.

After these core front-end dev skills are two JS frameworks: React and Angular. 44.6% of front-end developer job postings expect you to be familiar with React, while 40.5% ask for Angular. Knowing one of these frameworks is often considered a plus. So, having one in your toolkit can open up even more opportunities.

What about jQuery? What used to be a front-end staple has now decreased in popularity by 33% in the last five years. This is because modern browsers now have fewer quirks and standardization issues. That means jQuery is being used less and less. In fact, more front-end developer job postings ask for Git skills than jQuery.

Back-end developers build and maintain the inner workings of software and web apps, creating the logic to enable front-end functionality. They write code that allows the server, application and database to communicate with each other behind the scenes.

For instance, the third most in-demand skill for back-end developers is cloud platform AWS. In fact, 39.4% of all back-end job postings ask for it. This is because companies of all sizes are moving to cloud environments, which equals more demand for back-end devs who can build and deploy apps in the cloud. In fact, from October 2015 to October 2019, the share of AWS job postings increased by 232.06%.

The fourth most popular skill is database querying language SQL (31.7%), followed by a somewhat surprising addition to the top five: front-end language JavaScript (28%). As one of the most ubiquitous languages on the web, both software engineers and back-end developers need to understand the basics of JavaScript to communicate more effectively with front-end teams (even if they won’t actually be coding with it).

Full-stack developers typically do back-end work on the server side, but also control how the front-end of websites and applications look. Since they work across the full stack, they need a mix of both front- and back-end skills, including three front-end languages (JavaScript, Angular and CSS) and two back-end skills (Java and SQL).

It’s a “java” world when it comes to full-stack development. JavaScript is the most common skill, appearing in over two-thirds (66.7%) of full-stack job postings, followed by Java, which shows up in over half (51%).

Unlike soft skills, tech skills are ever-changing. Not all tech skills will be useful forever and what’s popular today might be replaced by a newer, trendier programming language in only a few years. That’s why it’s important to stay up to date on the latest tech trends and learn the skills that will keep you competitive in today’s fast-moving tech world.

Each software engineering role requires a unique mix of skills. But if you’re debating which skill to learn (or brush up on), consider your career goals, including your desired role and industry. That said, JavaScript could be a good starting point, as it’s the only language that makes the top five most in-demand skills for all four roles.

With the above tips and top programming languages, you should be well on your way to landing a great job in software engineering!

Pathrise is a career accelerator that works with students and professionals 1-on-1 so they can land their dream job in tech. If you want to work with any of our mentors to get help with your software engineering interviews or with any other aspect of the job search, join Pathrise.