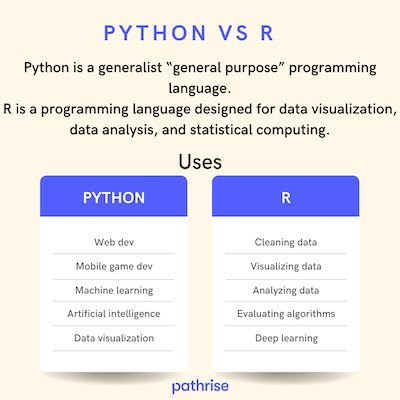 Hi, I’m Olga! I have years of experience in data science, most recently at eBay and now I work as an industry mentor at Pathrise, helping data scientists land a great role through technical workshops and 1-on-1s. Check out my article where I compare Python vs R.

If you are a data scientist looking to launch your career, understanding Python vs R can be a major advantage on your data science resume and on the job. Both R and Python tend to come up in data science interview questions as well. So what are the similarities and differences when dealing with Python vs R?

The key difference is that R was specifically created for data analytics. While Python is often used for data analysis, its simple syntax makes it a popular all-purpose language. Kids use Python to build games and wacky web apps. R is for hardcore statistical analysis. Unfortunately, the overlap can get messy. What programming language is right for different data science scenarios? What are the advantages of each language? Use this post to identify key similarities and differences for Python vs R as well as when to use them.

What is Python and what does Python do?

Python is a generalist “general purpose” programming language. Code in Python is easily readable with lots of indented white space, making it a popular choice for a first language. Python’s object-oriented code and constructs were built to stay logical and structured. That helped skyrocket Python to the status of third most popular coding language in the world. Reddit was coded mostly in Python. Major companies like Google and Facebook still use Python to this day.

What is Python’s best use?

Python is sometimes called a “batteries included” language because of its massive library, which is standard in the language. MIME and HTTP are supported automatically, with 290,000+ packages included in its official repository. Python libraries support Numpy, Pandas, NumPy, SciPy, and Matplotlib for scientific computing with big data. Machine learning and deep learning engineers often utilize Python for large-scale projects. Python skills also tend to be popular with recruiters and hiring managers as the language often comes up in interviews. Python’s best use for data job-seekers? Acing technical interviews. Check out these resources to learn Python and Python interview questions from top tech companies to prepare for your data science interview.

However, Python is not just for data scientists. Python shines as a scripting language for web apps for its simplicity and structure. Uses range from natural language processing to 3D animation packages. Python may be more universal than R, but it’s also much less specific. Its “general purpose” nature makes it an essential part of a data scientist’s toolbelt. But just because Python can wrangle almost any data job, doesn’t mean that it should.

The most popular uses for Python include:

When do data scientists use R?

R is a language for statistics and data. Some of the most popular uses of R include:

R truly shines with its data visualization and graphics capabilities. Its accessible interface makes it popular with data analysts who may not have much experience with software or advanced programming languages.

R is often used within RStudio, which is the intuitive development environment for data analysis and visualization. R apps can be run directly on the web with Shiny so users can instantly visualize data in their browser with only a few lines of code. However, R is far more specific than Python and often used for more advanced data tasks. While it may only take a few seconds to learn to plot means and modes, advanced data analytics with complex algorithms will be far less intuitive. This means having a data background may be more of an advantage when learning R than learning Python.

When to use Python vs R?

Both Python and R are open source languages with intuitive designs and large community fanbases. However, Python is more comprehensive while R is more focused on statistical analysis. Python is a generalist language everyone ought to know that can usually get the job done for data tasks. For example, Python can be used to code a translation web app and wrangle all the necessary data.

R is a more specific tool for more intricate data jobs. There’s a reason R is the favorite language of brainy statisticians and tenured university researchers–it’s the language of data itself. Use R to clean, analyze, and visualize complex data. When coding the aforementioned translation web app, the team’s data analyst might use R to analyze the big data behind complex English speech patterns and then apply the findings to the translation app’s artificial intelligence capabilities.

Both Python and R can be critical data science tools that you should master to land a great job. Not only are they useful on the job, but they’ll both be invaluable for data science interview questions. If you are looking for more guidance on how to get a data science job, check out our guide.

Pathrise is an online career accelerator that works with students and professionals 1-on-1 so they can land their dream job in tech. If you want to work with our mentors to get help with technical data science subjects or with any other aspect of the job search, become a Pathrise fellow.